The Original Garden Broom- A Review

My first encounter with this garden broom was on Christmas Eve 2012.  On a last minute run to town, I happened to notice this lovely looking broom in the window of our local Home Hardware store.  It was intriguing enough for me to head into the store to check out.

I am so glad I did!  Upon examination, the bristles on this broom are very stiff and thick compared to most brooms.  They are brown and obviously of a natural fiber.  The best way to describe this broom is to say -it looks like a witch should be riding it!  In fact, as I was carrying it down the street after purchasing it, a man asked me if I was going to ride it home!  I cackled at him and said I was most definitely going to be riding it and he better watch out 'cause Santa wasn't going to be the only one in the sky tonight!

Upon arriving home at the Shack, I couldn't wait to try it out...Not riding it, silly!  I pulled off the cardboard sleeve around the bristles and began sweeping the snow that had blown onto the front steps and porch.  WOW!  I was in love!!  The bristles are stiff enough to move the snow, even the stuff that has been stomped into the wood of the stairs.  Then I tried it on the snow that had come down that day onto the path to the stairs.  The walk had been shoveled  and then had gravel sprinkled on it.  The problem with having snow all winter is you do have to keep shoveling the new stuff as it falls. Other wise it becomes a bigger, heavier job. This broom made short work of the new snow on the packed trail, and left behind the gravel that was embedded in the old snow, so I didn't need to reapply it! Double WOW!
I have happily swept snow off the deck all winter while dreaming of spring and the time I would be able to start the yard clean up around the Shack.  It's amazing how a great product makes all the difference in how you feel about doing the job it involves.  I actually loved using my broom!!
Fast forward to my recent trip to Vancouver Island to await the arrival of my oldest daughter's 2nd baby.  I was there for 3 weeks, and in that time it rained...a lot....but, that's spring on the Island!  It's where I grew up and the place I still call 'home'.  I love the Island!  And I was happy to be able to be there for the birth of my 2nd grandbaby, Davy on March 3rd. 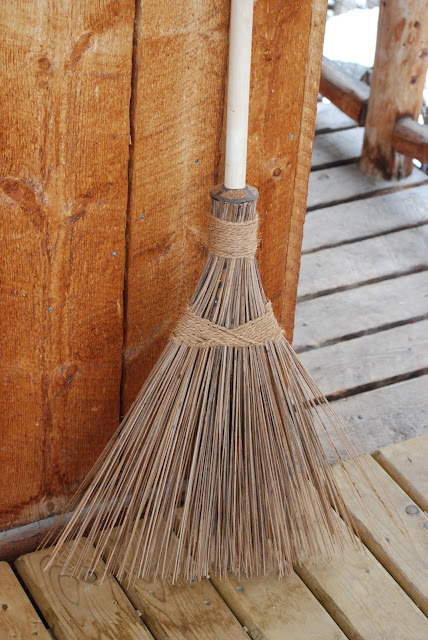 While there, I stayed with my Mom and was able to help her get her garden into shape for spring, that is, after it stopped raining!  My mom is a wonderful lady!  I'm so proud to call her my Mom!  Her garden is one of her great loves, but in the past few years it has become a bit more than she can deal with on her own.  My dad has Alzheimer's and has been in a home for 2 years now, so she has had to deal with the house and garden on her own. Mom has done so much with the garden, but it needed a good clean up.  We began by getting the paved driveway and side yard swept and raked.  While I was doing the raking, Mom swept the driveway. I noticed (couldn't help but!) the broom she was using had certainly seen much better days.  I had to make a quick trip downtown, and snuck in a stop at the local Home Hardware.  I knew exactly what I was looking for and found it without any problem.  The Original Garden Broom!  I headed back to Mom's with my surprise.  I presented it to her and told her it was an early Birthday/Mother's Day gift, as my mom's birthday is May 13th and is always either on Mother's Day or very close.
After just a few minutes of sweeping she was as thrilled with it as I am with mine!  It did an amazing job on the paving, getting into the edges where the paving meets the rock wall.  Sweeping up the leaves, pine needles and debris was a breeze!  Then the area around the front door where Mom has gathered round beach rocks, and where the leaves and pine needles get caught and are hard to remove was tackled.  Easy!  The broom's stiff bristles grab all the old tree stuff and pulled it out from between the rocks.  And don't get me started on the brick patio!  It cleaned the moss and anything else that had wedged itself between the bricks out and left it looking like the bricks had just been put down!  It was wonderful for sweeping the bark mulch clean of leaves, and the deck was cleaned up ready to be power washed in no time.  Mom says she plans to go and buy another one...she never wants to have to be without one! 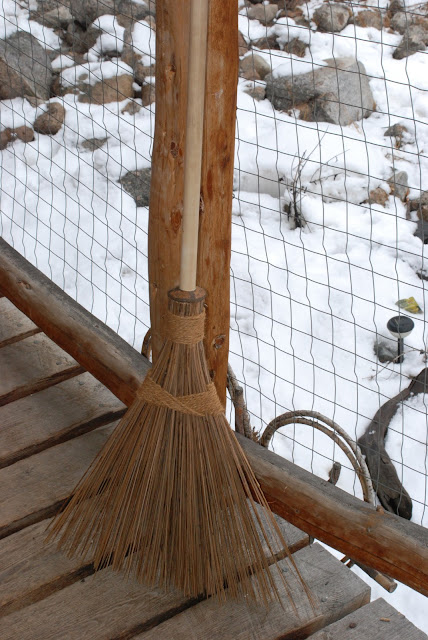 As you can tell, I LOVE this broom!  I highly recommend it!
The Original Garden Broom is made from fallen coconut branches.  It comes to North America from Sri Lanka and is environmentally friendly and ethically traded.  They first were marketed in Vancouver, BC by the mother-daughter team of Fran and Maria (Franmar International Importers) and are now available in the US as well. Click here for the list of places you can pick one up.

Just to be clear...I am doing this review because I am so impressed with this product and not because I have been paid by the company. In fact, they don't even know! lol!

Your comments make my day. I love getting feedback from you. Please take the time to let me know what you think of this post, and also, if you are a blogger in need of some blog-love, leave your site address so I can go visit you too!

Welcome to the Little Shack!

I'm Susan. Wife, Mom to 5 and NanaSue to 5. At the Little Shack we are always in the midst of a project. That's what happens when you buy a fixer upper. To help keep my sanity, I share recipes, crafts and ideas as well as our progress on the Shack. Come hang out for awhile!
Visit Sue @ the little shack's profile on Pinterest.